Oporto Sports would like to congratulate four of our County FA clients, who have received accolades in this year’s County FA Recognition Awards, which took place digitally on Friday 4 December.

The awards recognise and endorse the best projects, products and services launched by County FAs over the past season while sharing best practice and learnings from around the country.

Birmingham and Staffordshire FAs, with Leicestershire and Rutland FA, won the Women and Girls Award for their Female Football Series project.

London FA received a joint Football Development Award for its 100FC project which, in partnership with Amateur Football Alliance and Middlesex FA, works to develop 100 female coaches in London.

Finally, Liverpool County FA received a Special Recognition Award for their work with asylum seekers through the World in One City League. 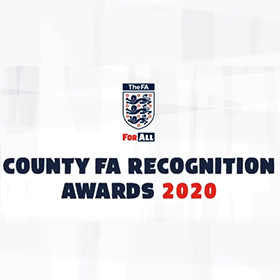