Oporto Sports broadcast client Eisha Acton was one of a select few invited by Nike to the National Football Centre at St. George’s Park recently, as part of an exclusive event unveiling the brand-new England kit.

As part of the event Eisha, who has been a regular voice on BBC’s Final Score this season, was not only treated to a first look at the new kits and boots, but later became part of a football match at St. George’s Park; overseen by England internationals Emile Heskey and Jack Wilshere. Post-match, Eisha was allowed full use of the facilities utilised by the England teams at the National Football Centre and enjoyed an overnight stay at the site’s Hilton hotel, in addition to receiving a Nike goody bag.

For any sports broadcasting opportunities for Eisha, please email dean@oportosports.com 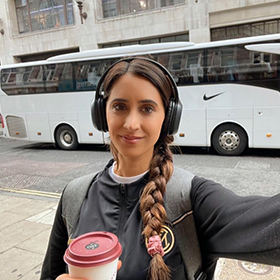